Pivoting through Art (with Mark Evans) 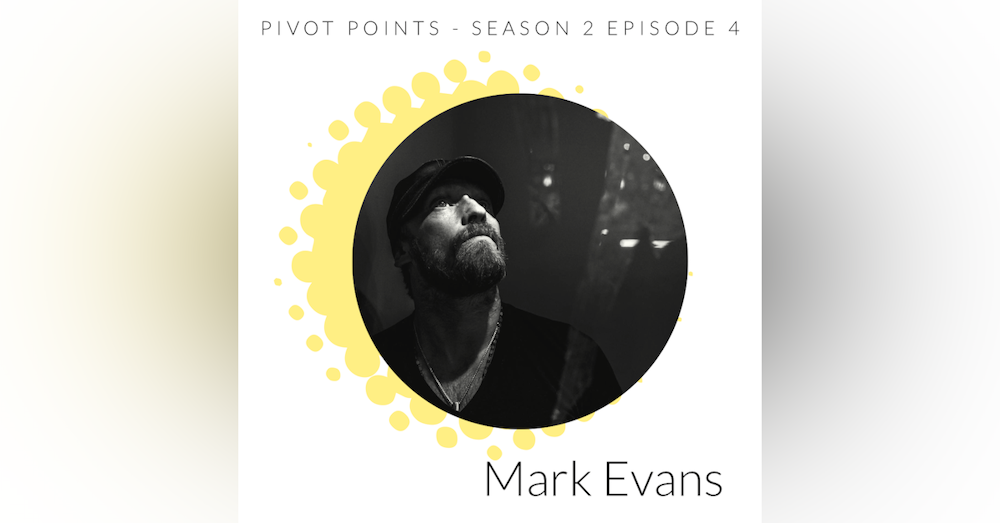 In this episode I speak with the artist Mark Evans. We go deep into the architecture of a pivot point.  We chat about what he has learned from observing nature, the ploughing and harrowing of ground before new life can grow and the pain of creating with bravery.

Mark grew up on a rural farm in the Welsh mountains.

At the age of 7 his grandfather gave him a small pocket knife which he used to carve images into trees and wood bark, that knife would influence the rest of his life.

In his twenties, Evans left the farm and in 1995, during the height of the YBA explosion, he moved to London to study Fine Art at Middlesex University. For several years he worked with more conventional and traditional materials such as charcoal, oils & acrylics but they felt too synthetic, too safe. He couldn’t quite escape that primal childhood sense he had when he created an image by cutting & carving with that first blade.

It was winter 2000, the turn of the millennium, and Evans was trying to clean a patch of blood off a new leather jacket he had been given that Christmas. By accident he scratched into the surface of the jacket and that tiny patch on the leather suddenly opened up a whole new world of possibilities.

“It was my own Archimedes “Eureka” moment... it was as if an explosion went off in my mind. I saw a world of possibilities. I then spent the next few years focused on developing this technique at my studio. I was living as part artist & part alchemist trying to perfect the process which I’d accidentally discovered.”

Nearly 20 years later Evans now works with animal hides from all around the world, and hand-etches them with dozens of different knives & scalpels. After two decades he has perfected both the etching and the leather tanning, which is integral to the overall process of the art piece.

The procedure takes incredible patience and immense attention to detail, he removes less than a tenth of a millimeter of the leather surface. Evans cuts through the layers of dark skin, removing just enough skin until he exposes the varying tones of lighter tanned suede (or nap) beneath.

Evans describes his work as “micro-sculpture” and his pieces occupy a space somewhere between painting and sculpture, and each artwork can take months to complete.

He adds “Working in leather has huge aesthetic appeal, leather is ancient, yet elegant, leather has historic heritage and yet it’s very contemporary. Leather gets better with age and in our plastic, synthetic, digital world, leather has an authentic integrity. Animal hides were once a living, breathing creature and we subconsciously respect that.”

Evans’ works are held in private collections around the world, and his collectors vary from Royalty to the Hollywood A List.